The Quay provides a single continuous straight edged Quay of some 120 metres in length, running parallel to the general shoreline at approximately 260/08’ degrees true. At the western end, the Quay projects some 40 metres from the shoreline whilst at the eastern end the loch shore turns northward into the bay and estuary of the river Kishorn. The Quay top stands 10 metres above the seabed.

It is recommended for approach in daylight in good weather conditions, unless a Master is already familiar with the area or with a Pilot’s advice.

The Quay is open to the seaward ie west and deep water exists close to the Quay. It is suggested that the approach to the berth be made from the west as chart sounding indicates shallow water to the east of the Dolphins. The berth is somewhat exposed to the prevailing winds from the west and south west.

The bottom alongside the Quay comprises of a mixture of hard gravel and sand. The bottom is levelled to a uniform depth of 3 metres below datum, extending the length of the Quay and the width between the Quay and Dolphins, i.e. 132 x 40 metres approx.

Approaches from seaward tide tables – typical Spring range is from 0.1 metres – 5.4 metres and Neap range from 3.7 metres to 2.2 metres. There are well charted obstructions of Kishorn Island and the Garra Islands to the South West. (Chart No. 2528 ref.) The eastern approach is restricted by lesser depths of 1.5 metres immediately east of the offshore Dolphins.

The Quay could be occupied by vessels up to 100 metres or more, subject to terms not always afloat but safe aground. The present mooring bollard arrangement allows reasonable security for a vessel of up to 100 metres in length and approx 3500 DWT. 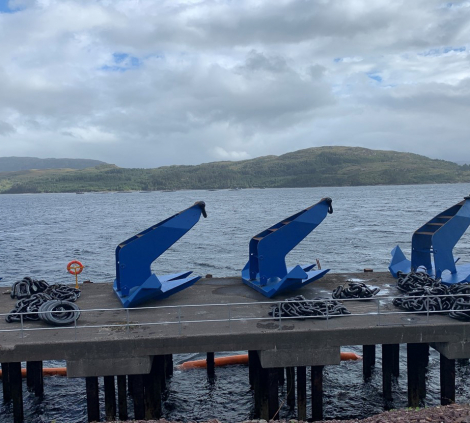 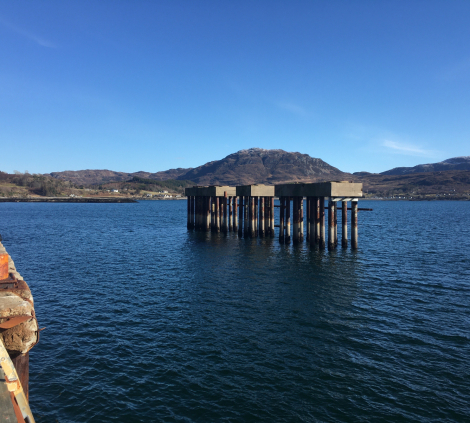 Serving the Energy Industry since 1975.